One of the best parts of the morning, for most of us, is stepping into a refreshing and calming shower. There is simply no better way to begin a new day than to let warm relaxing water lightly glide over your skin to gently wake you up. Contrary to the former, more traditional, shower heads, these contemporary rainfall units provide a tranquil and smooth introduction to the day. Without a doubt, more and more consumers are trading their old, tired shower heads in for a, decidedly, more modern and luxurious rainfall system. Interestingly, many consumers decide on a change after staying in hotels which offer these ultramodern rainfall options. Let’s take just a quick moment to look at five of the best rain shower heads that are currently on the market. 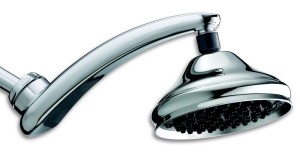 The Waterpik RPB-173 drenching rainfall system has a medium sized diameter of 6 inches. With a 4.5 rating, this is a great choice for those who are looking for a basic no-frills rainfall shower head at a great price. It has an easy adjustable arm as well as a convenient adjustable head, which allows for very easy and versatile positioning. Also included, is a removable flow regulator which some consumers remove to allow for more water pressure. Other buyers report that they prefer to leave the flow regulator in place. Simplicity of installation, a 9 inch adjustable arm, and the attractive appearance of this Waterpik are the features most commonly liked by consumers. In comparison to many others, this one is a bit smaller; although the smaller diameter did not stop thrifty consumers from purchasing it and rating it very well. 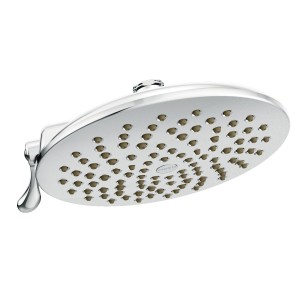 The Chrome Moen Velocity Rain Shower Head with immersion technology and a 2.5 GPM flow rate gets rave reviews. This Moen is a mid-priced option, and it earns a high rating of 4.7 among consumers. The chrome finished unit can be installed as a ceiling mounted system, and pressure can easily be adjusted with a simple move of a lever. This unit is designed with an advanced, self-pressurizing technology which moves water through with triple the power for a complete and thorough rinse. A significant increase in pressure is noted with this feature. Consumers also love the appearance of this rainfall shower head. This rainfall shower experience leaves users feeling perfectly relaxed and pampered.

The Hansgrohe Raindance Downpour AIR also rates a 4.7, at almost double the price of the less expensive Moen S6320. Despite the steeper price tag, this state of the art rain shower system earns a place among the bestsellers. The Hansgrohe comes equipped with QuickClean, which is an anti-calcification function. Lime scale deposits can be easily rubbed away from the silicon nozzles.   Resourceful buyers, who decide to install the Hansgrohe themselves, note that installation is a fairly simple process. The Hansgrohe flow rate measures a hearty 2.5 GPM, and the diameter of this sleek looking unit is rather large at 9 ½ inches. It seems, if money is no issue, this one fits the bill for many. Notably, one of the favorite features most mentioned by users is the larger size of the water droplets combined with the perfect water pressure which gives a clear impression of a more natural rainfall. 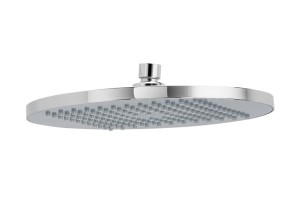 The American Standard Modern Rain Easy Clean is another exceptional value and mid-priced option. Rated by consumers at 4.6, this is one of the best rain shower units at a reasonable price. It has a diameter of 10 inches, and it is reported to be similar to a gentle rain and not extremely powerful. Constructed of brass, it is equipped with an easy to clean spray face. Users have also noted that the rain shower flow does seem to narrow slightly at midstream, and the unique square pattern is quite different than the other brands which most often offer a round spray pattern. The arm and flange are not included. It is fairly simple to install, and buyers agree that the appearance of The American Standard Modern Rain Easy Clean shower head adds a certain flair to their shower and bathroom. 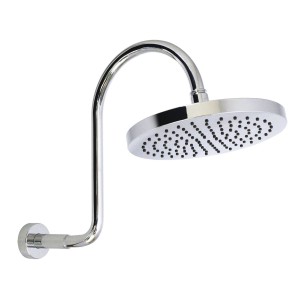 The MODONA 8 inch Rain is another lower priced option which is reported to be a great buy. Discerning consumers rate this one at 4.7, and the majority of users will agree that the price paired with the quality produces one of the most economical options available. One of the most valuable features of this particular model is that the S design of the shower head arm adds about 6 inches to the height of the existing shower. The arm is made of brass. It is designed for easy cleaning, including the build-up of calcium and lime. Users also report that the Modona AC42SH80-A 8 inch is a cinch to install.

As you can see, there is definitely something out there for everyone. We have even more options throughout the site, such as our review of the Grohe Euphoria. Depending on whether you are specifically looking for a great price, a certain style, or the best of the best; you won’t have to look far to find the perfect system that will meet your requirements. Two overall themes of those reviewed here is; 1) The difference the water pattern and flow makes in comparison to the older models, and 2) The designer flair look they add to a home.