The Niagara Earth has been reviewed by nearly 800 customers and received a 4.5/5 stars. Users love it because it is easy to install, it has two shower stream modes (regular and massaging), there is no pressure drop when other devices that use water are in use, it has a nice flow of water for only being a 1.5 gpm unit. One of the complaints is that there is not an option to turn the Niagara  “on/off” while you are “lathering” up to be able to save even more water. After only one month of use, one user had noticed a 10 dollar savings on their monthly water bill, not only lowering the water bill but it is also an energy efficient option, lowering your sewer and electric bill as well! 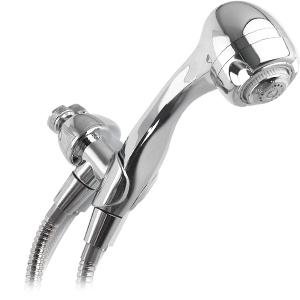 Features of the Niagara Earth

The hose is made of a stainless steel with the actual head being made of plastic. The hose is long enough to clean the hard to reach areas. The Niagara Earth provides enough power at the 1.5 gpm to rinse your hair of the hair care products (shampoos and conditioners). One of the users bought it specifically for the massage capability and is very happy with that function.

The Niagara low flow Earth is recommended for your child as they head off to college to replace the one provided from the school dorm as it will still provide schools with the desired energy efficiency and save on the water consumption. Even groomers can use it at their place of business to reduce the water usage.

It is also good to use in your R/V as you would be able to conserve your precious holding tank space. Not to mention another energy efficiency saver with your propane as you will not need to heat up the water as much.

It should be noted that one consumer had problems with leaking but many others comment that they have gotten rid of that issue with using Teflon Tape prior to installation during install.

Another issue was the amount of water flow, but a quick disassemble the user was able to remove the rubber water flow seal. That alleviated that issue. The Niagara Earth will accumulate some hard water stains if you do have hard water or a well but nothing that a soak in a little bit of Vinegar won’t get rid of.

Another issue with the Niagara is the stream is too narrow. Users commented that it takes some getting used to but that is why the Niagara had “earth” in its name. It has an average expectancy of over 1 ½ years with quite a few reviewers saying it has lasted them quite a few years.

It provides a good expensive look while being a reasonably priced energy efficient option with a 1.5 gpm speed.

Read More About the Niagara =>